Where is the SNOW?!

As a Canadian, to say that it doesn’t get cold in Germany is understatement. We curreently live in an area that has amazingly mild temperatures. With friends and family living in both central Canada and the east coast, boasting about the local weather borders on cruel and unusual punishment; snow passed the windows in PEI, $9 million dollar over-budget snow removal in Nova Scotia, Niagara falls froze over and 45 car pile-up on the 400 highway in Ontario.

I have to say, I love snow. I don’t love shoveling snow or driving the dangerous roads to get to work but I love playing in the snow and making snow men with my son. I enjoy cuddling under a blanket to watch a movie with a nice cup of tea or hot chocolate, depending on the mood, and having a fireplace to warm the house. Germany…doesn’t really offer any of that.

When we moved here in July, we were told that there was 3 weeks of stupid hot and humid and you will want to move into the basement during this time. We bought two standing fans and survived without AC (the first time in my life that I haven’t either had central air or a window unit) and it wasn’t that bad. Around October, I asked when winter would start. Canadians said “never”, Americans said “in a month or two” and Germans said “last week”. Clearly this was a stupid question. While the munchkin and I wore jeans and a long sleeve (still in flip-flops I have to add, I will wear those until the snow falls), the neighbors were busting out their hats and mitts, fuzzy boots and winter coats. We received a few odd looks at first, then we were just known as the weird people next door.

I started planning our Christmas vacation to London and asked a few people for their opinion. I even asked Google for it’s opinion of winter in London. Obviously they have never lived in Ontario. We were told that it was way too cold to travel that far north – we are currently at the same latitude as northern Newfoundland, so you can only imagine London being that much further north. We got a few “the sun goes down so early and rises so late, there isn’t much sun during the day to have a good time”. We took this into consideration so a day or two, until one of us had the bright idea of checking the sun rise and set for our area; London was all of 30 minutes shorter than here. So I’m either in the dark at home or in London… I choose London. The weather wasn’t all that bad. We brought the munchkins snow pants incase we decided to go skating but the rinks were actually shut down because it was too warm and it all melted. He often had a blanket on his lap but sitting for hours in a stroller tends to be colder than walking. I had my regular winter coat with a long sleeve underneath and I was perfectly warm.  Unfortunately, not a drop of snow fell the whole time we were on the island.

End of January came and still nothing that felt like winter. It was cold-ish; 5 degrees here, -1 there, but the farmer next door was still planting and harvesting so it couldn’t have been that bad. There wasn’t much rain fall, but there was much overcast and very few sunny days. It was often windy, but not the bone chilling kind. When I think of winter wind, I am reminded of the internet meme “the air hurts my face; why do I live in a place where the air hurts my face”.

Finally, last few days of January and we woke up to snow on the ground. Not a light sprinkle that melts when you look at it, but a nice two inches and more was still falling. I can’t remember who was more excited, munchkin or myself. Either way, we got dressed and ran outside to play in the snow right away; forget breakfast, we don’t have time for that. We played in the field behind the subdivision for a while, made a snowman and munchkin asked for the sled when we needed to go to the grocery store. As we walked back to the house, we saw the neighborhood wake up and start shoveling their driveway. Since we live in row housing, everyone is responsible for the driveway in front of their property, but the whole row is responsible for the street next to their row. The houses that lined the secondary roads were also shoveling the streets in front of their homes… with only one snow day per year, I can only imagine the lack of snow-removal equipment  at city hall.

We joined the neighbor in shoveling our driveway and the kids played nicely, helping the parents move the snow. He asked us if this was making us home sick. Of course, we told him that we loved the snow but grateful that it wasn’t several feet high over several months. There is a limit to my love, after all. We asked him how often it snows. “Today” was his answer. The last two years, there wasn’t a single snowfall and he expected that this year, today would be the only one. I was surprised that he even owned a shovel by this point, but they had just moved here from further south so they have personally had snow in the past.

It’s been three weeks since the snowy day and it has only gotten warmer. Winter is officially over. Last week, I even raked the leaves in a sweater, while the neighborhood insisted on wearing tuques and their Canada Goose jackets. The trees in my front yard are pudding flowers and the birds never migrated south (I hear south is colder than north in these parts of the Europe… just when I thought I understood the world).

Just last week I was in serious trouble with my mom. I forgot that there was a long weekend so I didn’t get a chance to plan anything. Thursday night came and I googled a few places for day trips but found that most websites described them as too cold in February to travel effectively. I’m 6 months pregnant so sitting around the house is ok too. My mom asked what I was going to do that weekend, I told her what I discovered, then she proceeded to blast me on Facebook, attached to a screenshot of her weather network app. I guess wind and -5 degrees as a record low for Amsterdam  is nothing compared to -25, feels like -40 with an extreme winter cold advisory. I am screwed when I move back to Canada in 4 years. My children will hate me. 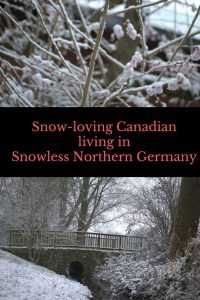 For more information on the gear we wear during cold-weather vacations, check out a recent post on the Proper Gear to wear in a European Winter.

Previous Post: « Ultimate Guide to Visiting Munich with Kids
Next Post: Affordable Family Travel without Compromising the Integrity of the Vacation »