Grimaud Village a quaint little town on top of the mountain, overlooking the Gulf of Saint-Tropez and many vineyards.

I often joke with my hubby that maps of Europe are not to scale. Since we have been together for almost 10 years, he knows I am not that stupid. Because Europe is so dense, things are zoomed in and appear further away than they actually are (until you look at the legend, of course, which I never do).

That being said, I thought the village of Grimaud was closer to the resort, using this zoomed-in “logic”. Nope. It’s just as far as it appears. With a twist. It’s up a mountain.

The resort offers a bus/train transit called “Le Petit Train de Grimaud” that has a starting point within the resort, a stop next to the port (maybe 2 min drive), then it continues down the highway and up to the village. It is a guided tour in 4 different languages, costs 7 euro per adult for a round trip,  and takes about 50 minutes to do a complete circuit.

After disassembling the stroller and placing it in the rack behind a train car, there wasn’t enough space for the car seat, the baby girl refused to nap and the train was too full for us to take up two booths. (little did we know that this would set the tone for the day).

Down the street from the drop off site was an elevator to go down to the main village and visit the fountain and tourist centre. They provided us with a map. If we wanted to take the full walking tour, follow the numbers on the walls and it takes about 1.5 hours to reach the castle ruins at the top of the mountain.

Or, we could just make our own way up and it would take about 10 minutes… she didn’t realize we had a stroller… although my stroller is often dubbed “the ATV”. We made our way back to the drop off point and followed the streets upwards towards the general direction of the castle. The stairs were very shallow and could easily be rolled up. The streets were not that narrow and the cobblestones helped baby girl fall asleep.

Once we arrived at the foot of the castle, there were two sets of steep stairs. We separated the stroller from the car seat and brought her up to the main landing, and then we went our separate ways; hubby stayed while I took munchkin to the top of the castle to look around. The idea was to switch eventually, but a little accident involving the castle breaking his fall meant we headed back down so doctor daddy could have a look at his new goose egg.

The church was nice to see on our way down for lunchtime; munchkin reminded us of the rules, “use your indoor church voice”. I’m glad he remembers something from our frequent travels.

The rain was just a sprinkle but helped break up the heat so we weren’t bothered by it. This did mean, however, that everyone else fled to the restaurants so by the time we got there, they were full. Munchkin was hungry and getting rude (why can’t we sit, where is the gentleman, when is someone leaving yet), the baby girl was hungry and tired, I was hot and hubby was overall not impressed with the kids’ behaviour.

She cried or whined most of the lunch so I had to leave frequently to nurse and sooth without totally ruining everyone else’s lunch (I am not interested in being THAT mom).

She eventually fell asleep after we were done eating and the restaurant staff was very happy for us. The frequent bumps on the train eventually woke her up but we were going swimming and she knew it so she kept it quiet.

Overall, we took the 11:10 train and took the 3:50 return train. The long day overall. Not enough wine in the world could erase by headache. The beach definitely helped though. 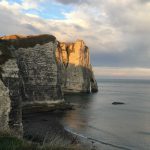 October 27, 2016 Comments Off on See the White Chalk Cliffs and Arches at Étretat Normandy Coast 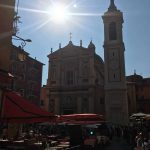 September 21, 2016 Comments Off on 2 Days Exploring Nice, France in the Beautiful Provence-Alpes-Côte d’Azur with Kids 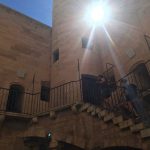 Things to do in Marseille with kids

September 1, 2016 Comments Off on Things to do in Marseille with kids 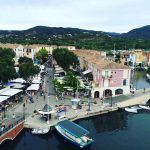